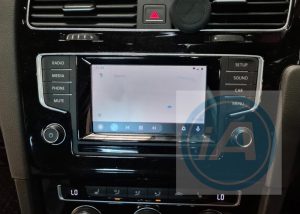 The IMI-1000 from Integrated Automotive UK is a retrofit CarPlay and Android Auto Kit that adds Carplay and Android Auto functionality to a standard vehicle. The kit gives an “OEM” feel and appearance as it retians the existing vw MIB1 display on your dash as well as the MIB1 controls (Dash buttons and steering wheel contols)

Video Demo of the IMI-1000 by Ilkley Car Audio

NOTE: YOUR VW MUST HAVE AN MMI MODULE IN THE GLOVEBOX – EMAIL US IF YOU ARE NOT SURE OF COMPATIBILITY

This kit is compatible with the following vehicles fitted with the MIB1 VW Entertainment system;

The IMI-1000 is a retrofit kit that adds CarPlay and Android Auto connectivity to VW’s equipped with the MIB1 entertainment system. The IMI-1000 works by communicating with your existing MIB1 system as well as your in-car entertainment system such as the OEM Steering wheel controls, MIB1 controls and associated buttons, vehicle speaker system and the Central Information Display. It operates in either by-pass mode or in “active mode”. In by-pass mode the IMI-1000 does not affect the normal operation of the in-car entertainment system, the standard VW MIB1 interface and the standard VW navigation system(if fitted) will be shown on the CID when in by-pass mode. Active mode is initiated when you connect your mobile phone to the car via the wireless Bluetooth connection or USB cable. After connection, the IMI-1000 activates CarPlay or Android Auto (dependent upon the operating system of your phone, iOS or Android). The Central Information Display (CID) will then show the CarPlay or Android Auto user interface and unleash the power of CarPlay/Android Auto!